Enoshima Shrine was first built at Iwaya in 552 upon the imperial order of Emperor Kinmei. Today, three shrines called Hetsunomiya, Nakatsunomiya, and Okutsunomiya, are collectively known as Enoshima Shrine, a name which it has held since the Shinto-Buddhism syncretism during the Meiji Period.

This bronze torii gate is located just over Enoshima Bentenbashi Bridge. Originally made of wood, the gate was rebuilt in bronze in 1821, and the names of the financial donors who helped pay for it are carved on the gate. The gate is a designated cultural property of Fujisawa City. From this bronze torii gate, a street stretches as far as the vermilion-lacquered gate in front of Zuishinmon, and passes through an area known as Monzen-machi (Temple Town). The street is lined with traditional Japanese inns, souvenir shops, and restaurants. This street is called Benzaiten Nakamise Street. This gatehouse is named Zuishinmon, and is modelled on the mythical Ryugu-jo (castle under the sea depicted in the Japanese tale “Urashima Taro”). Zuishinmon can be taken to mean “pure soul”, and it was named as such in the hope that visitors could refresh their minds by praying here. Situated next to Hetsunomiya Shrine, Hoanden is modelled on the Yumedono (Hall of Dreams) of Horyu-ji Temple in Nara. It is said that Minamoto no Yoritomo donated the statue of Happi-Benzaiten in 1182, with the statue of Myoon-Benzaiten (Hadaka, or Naked Benzaiten) being donated later during the Edo Period.

Note: The renovations that were taking place were completed on October 24th. 2015 Who is Benzaiten?
Together with the shrines on Miyajima (Hiroshima Prefecture), and Chikubushima (Shiga Prefecture), Enoshima is known as one the three most famous shrines to Benzaiten in Japan. Benzaiten was originally an Indian God of Water, and it is believed that the Benzaiten faith in Japan began during the Nara Period. With an effigy of Ugajin (God of harvest and fertility) above her head, Happi-Benzaiten holds a bow, arrow, sword, precious stone, wheel, spear, pestle, and key in her eight arms. This is the oldest statue of Happi-Benzaiten. She is known as a God of good fortune, wealth, and war. Derived from “The Legend of the Three Scales”, the Enoshima Shrine crest depicts three scales surrounded by oncoming waves.
According to “Taiheiki” (the epic Japanese historical literary work), in the year 1190, Tokimasa Hojo, who was leader of the Kamakura Shogunate, *confined himself to the caves at Iwaya for a period of prayer for the prosperity of his children. On the final night of his prayers, Benzaiten appeared before him. Promising to fulfill Tokimasa’s wishes, Benzaiten transformed into a snake and then disappeared into the sea, leaving behind three scales, which since then became the symbol of his family.

* A period of time where one retires to a shrine or temple for prayer. 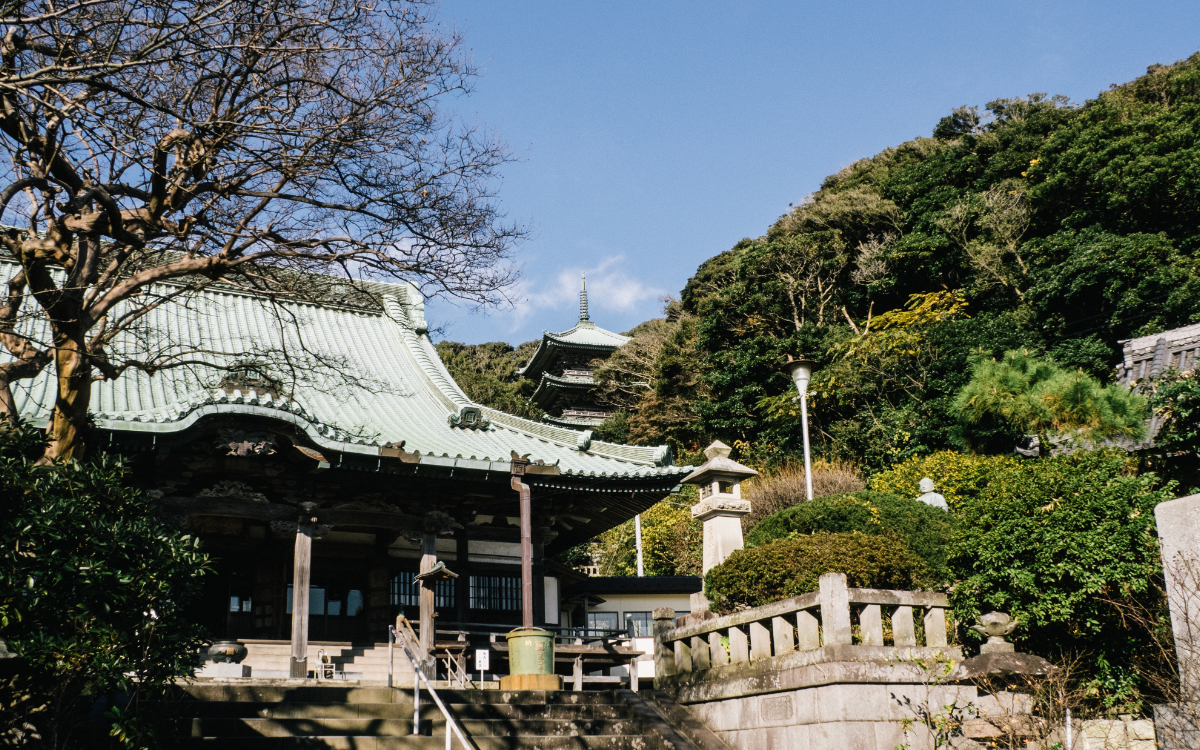