An Introduction to Fujisawa

Population of 441,547 (as of April 2022), covering an area of 69.56 square kilometers, located approximately 50 kilometers from Tokyo. Lying next to the Pacific Ocean, Fujisawa has enjoys a warm and mild climate, meaning the area is pleasant to visit even during winter. The attraction of Fujisawa lies very much in its rich and varied nature which can be enjoyed all year round, from the blue seas surrounding Enoshima, to the wisteria flowers adorning the city.

Just a few minutes from the fashionable shopping area and other amenities that surround the station are the historic streets of Fujisawa. One of the fifty three stages along the Tokaido Road, this area was once a flourishing inn town astride the main highway between modern day Tokyo and Kyoto. Other historic attractions include Yugyo-ji Temple, which is the birthplace of the traditional Japanese Bon festival dance.

In addition, the northern part of Fujisawa is home to thriving agricultural and dairy businesses, and visitors can pick seasonal vegetables and fruits such as tomatoes, pears, and grapes all year round. There is also an industrial zone which is home to many automobile and parts factories. 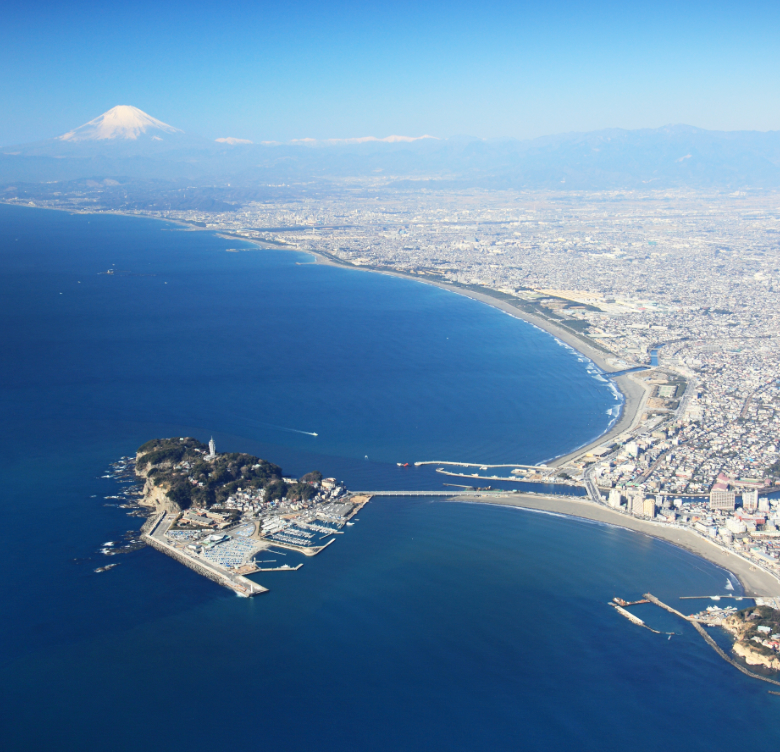 Scenic Areas of Japan Included in the Michelin Green Guide

Did you know Fujisawa is home to one of the tourist spots included in the Michelin Green Guide? That place is called “Enoshima”. Enoshima has, from long ago, been an island steeped in legend, history, and faith, and being located just 50 kilometers from Tokyo, the island can be reached in a short time.

Enoshima has also been selected as the venue for the sailing competition during the 2020 Tokyo Olympics. During the summer months in particular,the beaches along the Shonan Coast are a popular destination for many young people. From the beaches and flowers, to the many festivals, there are lots of attractions which can be enjoyed throughout the year.

Making their way from the nearest station over to Enoshima, visitors cross over Enoshima Bentenbashi Bridge, from which the majestic World Heritage site Mt. Fuji can be seen. On the road approaching Enoshima Shrine, visitors can also enjoy fresh seafood from any of a number of restaurants lining the street. Enoshima has been a destination for shrine worshippers since the Kamakura Period (1185 – 1333). During the Edo Period (1603 – 1867) what became known as the “Enoshima Pilgrimage” became particularly popular, and scenes of the pilgrimage were depicted in Ukiyoe (Japanese woodblock prints) made at the time. Buddhist monks Kūkai and Nichiren trained here; Minamoto no Yoritomo, who was founder of the Kamakura Shogunate, prayed here for victory in battle; and even Tokugawa Ieyasu was said to have believed in Enoshima’s spirituality. Furthermore, it is said that energy flows to the Iwaya Caves from Mt. Fuji, and this combined with the power of Enoshima Shrine, make the Iwaya Caves the strongest spiritual site on Enoshima.

In Feng Shui, the “Dragon” is regarded as a sacred beast that brings good luck. On Enoshima, “The Legend of the Goddess and the 5-Headed Dragon” is depicted in documents known as the “Enoshima Engi”, illustrated scrolls which tell the story of Enoshima’s origins. “The Legend of the Goddess and the 5-Headed Dragon”

Long ago there lived a 5-headed dragon. The dragon demanded sacrifices be made to him, caused floods, and rained down fire, committing one wicked act after another. In the year 552, the Heavens and the Earth suddenly began to shake and a goddess appeared above the clouds.

Gradually, the clouds gave way to sunlight, and Enoshima was born. The Dragon immediately fell in love, and asked for the goddess’ hand in marriage, but knowing of the wicked acts the Dragon had committed, the Goddess refused. Not prepared to give up, the Dragon vowed to mend his ways, and so the goddess (known as Benzaiten) agreed to marry him.

On the shore opposite Enoshima lies “Dragon’s Mouth Mountain”. The Dragon turned into the mountain so as to watch over the goddess, even after death, and it is said that the Dragon still keeps watch over Enoshima today. Due to “The Legend of the Goddess and the 5-Headed Dragon”, Enoshima is today famous as a spiritual site for marriage. In honor of this legend, Ryuren no Kane (The Bell of the Dragon’s Love) stands on Lover’s Hill on Enoshima. It is said that couples who ring the bell and then attach a padlock to the nearby wire fence will enjoy eternal love.